Visit of King Willem-Alexander and Queen Maxima of the Netherlands to Washington DC, Grand Rapids and Chicago | June 2015 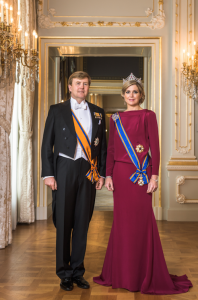 Statement by the White House Press Secretary on the Visit of King Willem-Alexander and Queen Maxima of the Netherlands:

President Obama will host Their Royal Highnesses King Willem-Alexander and Queen Maxima of the Netherlands for a meeting in the Oval Office on June 1, 2015. The King and Queen will on June 1-3 make their first visit to the United States since ascending to the throne. They are scheduled to visit Grand Rapids, Michigan and Chicago, Illinois in addition to Washington, DC. Their visit reinforces the strong and enduring ties between the United States and the Netherlands that reach back more than 400 years. The King and Queen were last hosted at the White House as the Crown Prince and Princess on September 11, 2009.

More information and the announcement of the Dutch Embassy / Consulate can be found on:
http://chicago.the-netherlands.org/news/2015/03/royal-visit.html

At the same time The King will be accompanied by 2 Dutch Economic Trade Missions:

More information on these trade missions can be found on:
http://www.rvo.nl/missievs

This networking event is your one stop shop for building stronger international connections. Open to…